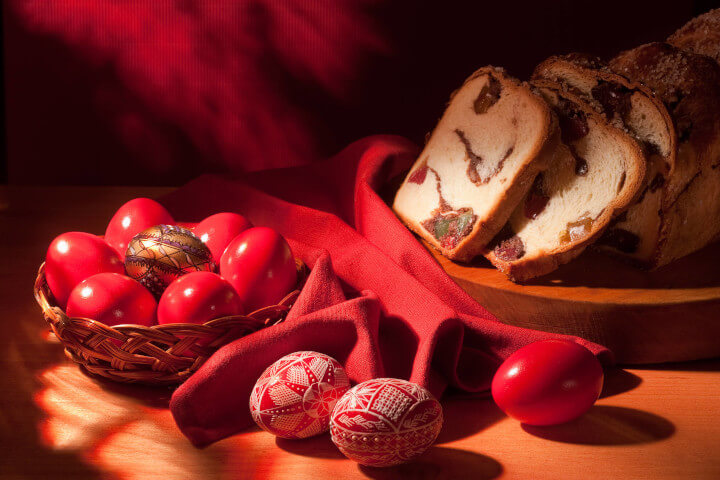 While the painting of Easter eggs takes place on Good Friday in most parts of the world, the custom is practiced on Maundy Thursday in the traditional village of Maramures. The eggs are painted in a wide range of colors that carry different meanings.

The red-painted Easter eggs, which are among the most significant, for instance, represent the savior’s sacrifice for humanity that involved coming into the world pure and dying on the cross for their sins. The people in fact believe that painting these eggs red keeps all sorts of evil away from their village. This makes them so crucial especially today when everyone is trying to keep pure as they wait for the Lord.

Easter traditions and celebrations are innumerable in Maramures and they go way beyond the painting of eggs but also tapping them together and putting in mind all the related superstitions. There are also other superstitions among the people of Maramures that refer to specific Easter table dishes which are the Lamb and Easter.

Additionally, the egg is used as a symbol of fertility among the people and it has been used over the years by some people to perform their holiday rituals. The people of Asia and Europe for instance who celebrated New Year at the spring equinox always offered bad eggs to friends and neighbors which is another instance where the red eggs were useful.

Romanian Easter eggs represent the Creator of the heavens and earth as well as everything else in it. As mentioned above, these eggs are painted in several colors with the red-painted ones representing Christ the savior who poured His blood on the cross to cleanse and save sinful humanity.

Since the red eggs are associated with the blood of the savior, there is a legend that says that when Mary Magdalene placed her basket of eggs under Christ’s crucifixion cross, His blood flowed onto them thereby turning them red.

Another legend explains the red eggs as a result of the emperor’s words who said that at the royal dinner that took place three days after the crucifixion of Jesus, the eggs on the table will turn red and the rooster that will be cooked will sing. Immediately the eggs turned red, the cock crowed.

In addition to the above legend beliefs and superstitions, Janet Ciocan also adds that it is the stones that were thrown at Jesus that turned into red eggs.

According to popular tradition, the evil on Earth will never overcome as long as people keep celebrating the Resurrection of Jesus Christ the savior and the red eggs keep being painted as a constant reminder of the sacrifice that Jesus made.

There is also a legend that says that God caught Lucifer in chains to prevent him from getting loose who is continually rubs the chains to try getting out. When he is ready to break the chains, Easter is fast approaching.

All the while he keeps asking if the red eggs are being made. When he is eventually told that the eggs are ready, the chains tighten and he has to start over which explains why evil cannot overcome good as long as Christians keep practicing the red egg tradition.

In addition to red, Easter eggs are also painted in many other colors to pass different messages such as yellow for divine love, blue that signifies the hope brought by resurrection, and black for the pain that the Holy Mother went through seeing her Son nailed on the cross.

While the eggs are painted in most areas in Maramures, they are also decorated in others such as Lapus and Bucovina.

In Tara Lapusului, these eggs are made from wax, adorned with multiple floral motifs, and passed through the relevant color just once with the red-painted ones being termed as the guardians of the home.

This is where the conviction that putting these eggs on windows of houses defends and protects the home. If the egg cracks and makes worms by the Feast of Ascension, the world is not only happy but it also means that the home will experience prosperity as well.

Part of the custom also requires everyone to wash in the water in which the red egg and a silver coin were placed before going for the Resurrection service. Doing so is believed to bring good health all year around.

It is also a custom for the whole family to feed on the first beaten egg in some parts of Maramures for them to stick together forever. According to tradition, it is the responsibility of the head of the family to hit the egg, clean it, and divide it into multiple slices depending on the number of family members. Everyone takes their egg slice and they all eat it at once.

In case anyone gets lost in the years to come, they will always remember this Easter Sunday custom and come back home. Getting lost does not mean losing one’s way in the streets or forest somewhere but rather going away from home for years without coming back or visiting.

One can easily know that they are on the right path if they always live knowing that their parents are somewhere waiting for them or a brother to always help them anytime, they are in need.

According to tradition, eggs always collide on Easter day but only men are allowed to do so and after saying ‘Christ is risen’ with ‘He truly rose’ as the reply.

In other places, the villagers are required to ask for forgiveness from each other and class the eggs immediately after the Night of Resurrection service is officiated.

Another Easter custom practiced in Maramures is sacrificing the lamb which was borrowed from the Jews. In the past, only men were allowed to sacrifice the lamb and it was carried out on Saturday. The sacrificial lamb represents Jesus Christ who died on the cross without any guilt.